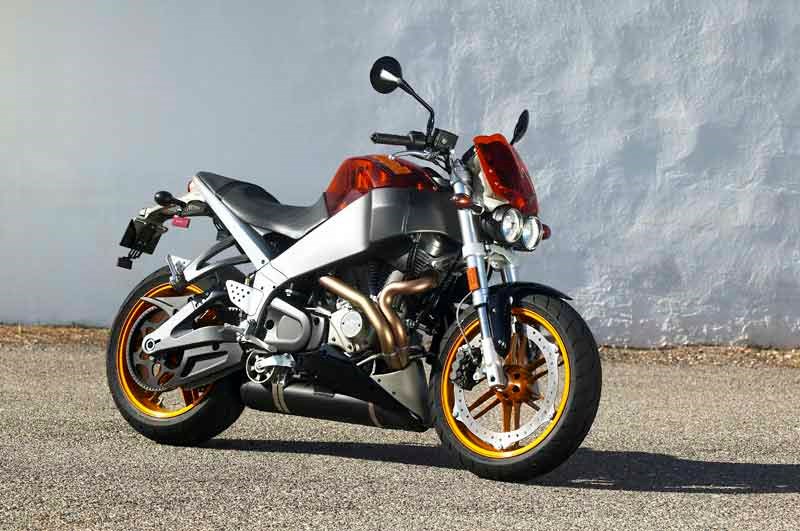 XB12S is part of the range Lightning, a name that does it justice because of the powerful roar emitted by the roaring discharge at every handful of gas.
A thunder that recalls the approaching storm and makes curious passers-by turn, which at first glance, remain dazzled by the captivating design of the American.
We took her for a walk in the hills, the highway and the city, trying to understand what her true character and limit was.
Noting the many small details that make them unique Buell, you immediately realize you are on an exclusive bike.

Starting from the key block, located on the left side of the instrumentation. Pressing the starter, the engine wakes up roaring angrily like a lion whose tail has been pulled. Inside the first and you find yourself traveling with an impressive pair always available at all laps and in all gears. The 1200cc V-Twin 45 degrees thus proves to be a true tarmac tear, with the power enclosed all between 2 and 6000 rpm. The delivery at the beginning may seem a little aggressive, but by making a hand we can exploit it in an almost linear way. On the other hand, the limited range of revs and the badness of the engine at the low, do not facilitate the use of the clutch and the gearbox. In fact, to drive fluids both must be used a lot and in the long run, the non-soft friction fatigues the hand a little.

If you are familiar with "the throw"Typical of the two-cylinder, you will immediately go strong with this XB12S.
In the city the engine is like a real urban thug. At every traffic light you need to be careful not to let the front take off and you travel without problems in traffic.
On the other hand, the total absence of aerodynamic protection does not recommend it for motorway routes: after just 50 km at a speed that is quite respectful of the highway code, the muscles of the neck and arms will begin to make you feel their disappointment.
At higher speeds, lying down against the tank, you could still risk seriously crushing the vertebrae in your neck, such is the pressure on the helmet.

On the curvy roads of the Pavia hills the music changes dramatically. Here the XB12S he is at his ease and his engine and chassis potential is well exploited. This Buell runs well through the corners and you don't have to worry too much about working with the gearbox, because even with a higher gear, you always have fun. It does not shine particularly in terms of agility and this penalizes a bit the insertion in the curve, but the trick is to drive cleanly and “round". This way you can be more effective, less fatigued and avoiding "fight”With the bike, to be able to enjoy the landscape too.

The suspension package Showa da 43 mm completely adjustable, it works really sincerely and transmits the sensations well to the pilot, even if the basic adjustments are perhaps a bit too soft. The braking system with zero torsional load ZTL ™ mounted directly on the perimeter of the rim, it is composed of the 375 mm disc with 6-piston caliper and transfers the force directly to the rim, but not on the spokes. An innovative system that does not produce particularly amazing effects. Braking is decisive and the response to the command is very ready, but in general everything is well proportioned to the performance of the bike, without great peaks of excellence worthy of note.

Returning to the city, however, one discovers its natural habitat. In the midst of urban architecture one realizes that the fashion cut of the XB12R it is completely integrated and at ease. The American turns to the streets with that acting actress who has to promote her new film. The feeling of maneuvering in the traffic with the roar of the exhaust that calls everyone's attention is very pleasant.
Aesthetically, the bike appears to be well finished. The transparencies of the fairing and the tank are beautiful, coordinating with the circles. The magnesium-colored casings are remarkable and the centralized exhaust is impressive, positioned exactly under the engine and covered by an enveloping tip. Finally, the aluminum frame and swingarm go well with the shaped saddle, which gives a sharp cut to the rear of the bike.

Arriving in the place more "in”In the area, you can park it willingly so that everyone can admire it. She likes getting noticed and doesn't hide it. And this is a bit the philosophy of a bike that keeps faith with its made in USA character, mixing easy emotions, fun and why not, an exclusive style.
Even the price of 11.995 € seems to be the son of a similar reflection. In essence, if you are not a motorbike tourism person, you love to take the "shot" in the hills every now and then, but mainly use the bike in the city, Buell XB12R could be the right choice.

This website uses cookies to improve your experience while you navigate through the website. Out of these, the cookies that are categorized as necessary are stored on your browser as they are essential for the working of basic functionalities of the website. We also use third-party cookies that help us analyze and understand how you use this website. These cookies will be stored in your browser only with your consent. You also have the option to opt-out of these cookies. But opting out of some of these cookies may affect your browsing experience.
Necessary Sempre attivato

Any cookies that may not be particularly necessary for the website to function and is used specifically to collect user personal data via analytics, ads, other embedded contents are termed as non-necessary cookies. It is mandatory to procure user consent prior to running these cookies on your website.